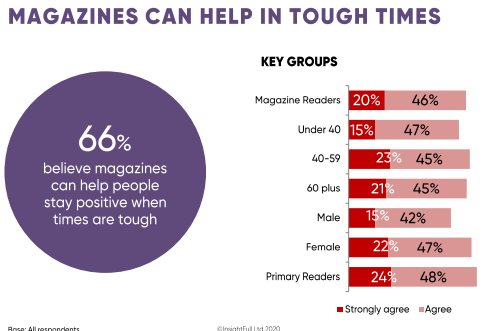 Research results out today show Kiwis think local magazines are particularly important in the post-Covid era – and they are spending more time reading their favourite titles.

Nielsen readership data (YE Q2 2020) looks at Kiwis magazine habits for the year ending June 2020, which includes Covid lockdown levels 3 and 4, when local magazine supply was at historic lows due to a magazine publishing ban.

Despite the supply issues,  the just-released Nielsen data shows that the average readership of measured titles was flat across the period – with 57 per cent of these titles recording increases on the previous release -  and the average time spent reading a magazine increasing from 52 minutes to 56 minutes (All people 15+).  The most committed magazine readers - subscribers and buyers - are reading their magazines for an average of 85 minutes, up from 83 minutes a year ago.

Home titles, special interest titles and entertainment and TV guides recorded especially strong increases in reading time, and the number of Kiwis subscribing to a magazine also increased (all people 15+).

“The Nielsen results are in line with what our own research tells us: local magazines are much-loved and trusted medium for Kiwis – and they are especially important during a pandemic, “ said  Magazine Publishers Association executive director Sally Duggan. “

The MPA's Magazines Matter survey (see endnote) – also released today – looked at the habits and attitudes of 1337 magazine readers throughout the country.

"As our industry prepares for some much-loved magazines to start publishing again, and with new brands launching, we wanted to understand what  New Zealanders  are thinking and what magazines mean to them" said Sally Duggan.

Eighty four percent of respondents thought it was very important that NZ had great magazines, and  two thirds thought they were particularly important at this time, with a similar percentage agreeing that magazines can help people stay positive when life is tough.

“The sentiment was overwhelmingly positive. There is no question that New Zealanders remain highly engaged with magazine content in all its forms,” said Kate Terry, Co-Founder, InsightFull Ltd. who lead the MPA Magazines Matter project.

Readers in the MPA survey reported high levels of recent engagement with magazines particularly in print, online and through e-newsletters. Seventy per cent said they gave their favourite magazines their full attention when they read them.

When asked to choose between them, respondents scored advertisements in magazines two or three times as high as digital or social media ads for trust, attention and memorability.

Other findings from the MPA Magazine Matters survey included:

Endnote: MPA MAGAZINE MATTERS SURVEY: Survey of n= 1337 magazine readers throughout the country. Fieldwork was from 26 August to 7 September. The work was conducted by Kate Terry, Co-Founder of research and consulting company Insightfull Ltd. with the sample derived from insights and reader communities of MPA members.  The results were weighted by age and gender to the Nielsen CMI universe of magazine readers. The margin of error at the 95% Confidence Level is +/- 2.68%